The King of Schietztreun Acres 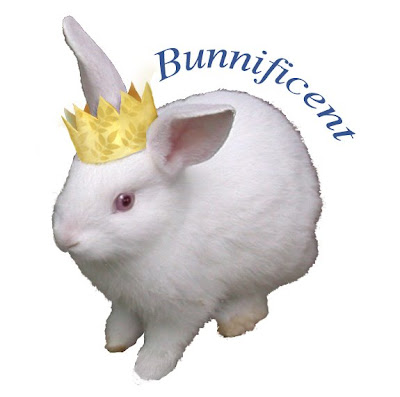 This is no ordinary rabbit.

He has singlehandedly saved over 10 chickens and 5 baby rabbits, twice.

Months ago, a woman gave me some rabbits to sell. A bunch of colored dwarfs, cute, and one giganto white momma. New Zealand White. The night before we were to sell the rabbits, all of a sudden big momma makes a nest, pulls her own hair out to do it, and by morning, had several tiny white baby rabbits. Some didn't make it, I was anxious, so I read up on babies, I was considering messing around with them, as she didn't look like she was feeding them! Turns out rabbits don't feed them but once or so a day!!! Not the most attentive moms, as they don't go chase them and gather them back, either, much.

We sold all the brothers and sisters, and most of the colored rabbits, eventually, but felt that this one was special. He escaped his pen, when he was a teenager-in-rabbit-years, but was easily picked up, as he had no fear of either the dogs or the cats or us. He has the run of the yard now, any time I go out during the day, I have absolutely no idea where he is. He might be under the woodpile, he might have burrowed himself half to China under the Bougainvillea, the one with the thorns that prevent anyone from going there. I don't know. He was impossible to keep in, other than lock him up in a hutch, and he generally stuck around, so we set him free.

At night tho, that's a different story. We had to put a plank up next to his girlfriend, as he likes to sleep next to her, she's in a hutch, so we had to elevate his perch. We did have her on a stand, and there was a board sticking out, and he probably fell off many times while we weren't looking, as it was too small for him to lay on and chat her up comfortably.

I often work late, as I am nocturnally challenged, always have been, and sometimes I hear noises, and go out and check, and sometime I don't, and go out in the morning to utter devastation, if a raccoon has visited silently. Things happen here, more things than I would ever care to talk about, as its a bummer. Life is like this, there are horror shows with farm animals that force the more tender hearted into their condominiums with no pet rules, they close the door and lock it and the life and death process is effectively hidden from them for awhile. Here it's more in your face.

Like when the raccoon took our beloved Polish Rooster only 20 feet where Nico was working on something in his shop. Snatched it right out of the hen house. From a perch! Nico ran to the house for a flashlight, but could only hear it now, in the far distance, and we never did find it. Then one morning a raccoon did some massive damage to some really cute young quail, causing Nico such consternation, arriving upon the carnage, that he tore off into the woods in his underwear, granted it was 6 in the morning, but if he'd seen the raccoon, he was of a firm mindset to pick up a rock, and he was so mad that if he had, he could have taken it out of a tree a hundred feet away and 20 foot up, I have no doubt. His anger makes him damn accurate. Mine makes me nothing but incoherent.

So, back to the bunny. We've had attacks that caused no noise, as I said. It was 2 am on a lovely quiet night. I stepped out on to the patio from my studio, and Bunnificent is coming at me fast. He screeches to a stop in front of me, on the sidewalk. He sits straight up like a rod is through his whole body, ears straight up, wild eyed. In an instant he took off running towards my husband's workshop, 30 feet away. I actually, i kid you not, said out loud "Whatsa matter, Lassie, did Timmy fall down the well again?" Turns out he had.

I walked after the rabbit, and within 10 feet noticed that there was a bucket full of eggs that a chicken had been nesting on for the last almost 3 weeks, and she wasn't on it. !!!!?

That right there was worrisome, as they never leave the nest at night. I walked over and felt the eggs. They were absolutely hot, like she had JUST left. I walked further, and the rabbit was no where to be seen, but there, in front of the closed chicken coop door, 20 feet ahead of me, was the chicken. In shock, she was bleeding out one ear, and one eye was starting to swell shut. Something had attacked her, and I didn't hear or see one thing. At this point she never would have returned to the nest, she was in one of those zones where they just go into some fugue state, while they decide whether they will live or die. I had just had another Silkie chicken this happened to days before, she'd decided not to finish her eggs, (only 2, but i felt bad anyway) after she'd been attacked and cut very badly. I bandaged the newly-injured white chicken like I did the Silkie, and knew that she would do what the Silkie had done, pumped full of Neosporin and all bandaged up, she'd just stand there deciding. In one place for days. Luckily I'd started our incubator just a few days before, regulating the temp, so all the eggs were saved. I just stuck them in the incubator.

I now had 2 shocky chickens, and one marvelously talented rabbit. He had come to get me, I was wondering if I should call him Lassie, but he was even better than that.
He needed no praise, he just wanted outdoor food and water, the run of the place and carrots. We see him all over, like he has some circuit that he runs, 5 pm, he's by the gate, waiting for us all to come home from work, at 11 he's with the girlfriend.

The babies hatched, and I had these 2 wounded chickenmoms, each had lost their will to set on their eggs, and both seemed totally shell shocked. (is there a pun there?) So, when the babies were in the brooder, I thought to myself, hell, maybe both of em could regain their will to live if I put them in the brooder with all these babies. Maybe they'll share em.

They did. Slowly the Silkie started moving around, showing them how to eat and scratch, but they crawled under the stoic white chicken to sleep. In a few months, they were all outside, the Silkie kept the mother thing going the longest, and they both recovered just fine. They've both since had more babies, and stayed with it for the course.

Back to Bunnificent. We mated the girlfriend dwarf bunny to another small bunny, I guess he didn't care, as he liked the boyfriend. The boyfriend was given to a friend after that, as I thought maybe Bunnificent would take a shine to the babies. He did.

He must have considered them his own, with no actual contact, except for twice by accident. Our learning curve at times is a flat line, I am sure of it. Not always, as we do have some talent at keeping things alive, but this time we did have massive brain failure.

I can't remember who found this scenario. The babies when they were born were all so tiny, we forgot, that they might fall out the holes in the bottom of the cage. I forgot how much they move around!!! The huge part of this story is that usually if baby bunnies that small fall out, there are any number of chickens that see this, and they are omnivores, that is, that they eat ANYTHING. We'd lost rabbits to them before, and just plain forgot. Well, they did fall out of the bottom of the cage. All 5. Who came to their rescue? Bunnificent. When we found him, he'd made a nest for them out of his own hair. He was determined that the chickens weren't getting these. How strange is that? A MALE? pulling his own chest hair out. We were amazed.

Then we did something really stupid. We piled hay around the outside of the cage, and more on the bottom, and the next day, the same thing happened. Flatline. Again, Bunnificent to the rescue. Dug a hole, fur lined, ready to defend babies and keep them warm. I've never noticed even the mother rabbit retrieving a baby, if they wander off, thats it. but this rabbit of ours has earned a place of respect I don't think that even the dogs have reached yet. I watch him sometimes playing with our cat, and think, how cool is that. He is one of all of us. He's always putting himself out there, engaged. There is something totally charming about seeing him out of the corner of your eye, an Alice in Wonderland fantasy, he knows you see him. He's everywhere. I also thank him for being a New Zealand White! When he is full grown, he's going to be huge. He's definitely big now, but probably will be twice the size he is now, and there is no hawk around, nor owl who'd want to mess with that. I've seen foxes and reports of coyotes, but he seems to know how to disappear into the woodwork, literally, and his brain is no average rabbit brain.

He will have the life he wants, and as many carrots as he wants, he's earned it.
Posted by Audrey Heffner at 8:38 PM 1 comment: Links to this post