Peahen on the Porch 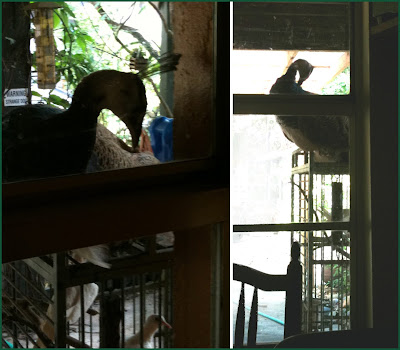 Mr. Peacock lost his wife of many years, how do you tell a grown peahen that just eating the sunflower seeds out of the food is not good for her? Well, we got babies, hoping one would be a female that could eventually be his wife. We raised them initially in the bathroom of the guesthouse, and what a mess. I brought them out when they could take some cooler air, to the back porch, giving them the attention they deserved, but the day came when I had to let them run free. They were now a match for curious cats, and bigger than the chickens. I did lose the weaker of the two I had, one day I came up to the back door, finding it wide open (damn dogs do the knob) and both peahens on the kitchen counter. My luck and theirs, I had made the perfect chocolate sauce for ice cream, it was on the counter, now all over the counter, and I do think that chocolate and bird do not mix. One got sick and shortly passed, the other one was so devoted to her friend that I had one heck of a time separating the two, I pulled a trash can over to the cage, put the deceased bird on the top of the can, and the other would sit watch next to it. When she got down to eat, I'd put a piece of newspaper on the bird, so she could still see it, and I'd wait. I put more paper on as she got up and down, and eventually I had it covered up and wrapped, and she never knew when I substituted a newpaper wrapped soda bottle. Bink handled the burial, and then in a few days, the paper blew off the bottle and Priscilla, as my friend Chrisanne has named her, didn't notice that I put the bottle and the paper in the recycle bin and life resumed. Thank gosh for short memory spans.

She now lives on top of the dove cage by the back door, she finally followed me, one time, to the big aviary in back where future-husband lives, I don't know whether to let him out or just put her in there eventually after more meetups, but I think she'll be horrified to be in a cage, and he'd be happy to run around outside the aviary, but omg. TWO peacocks on the porch? It'll be up to my ankles trying to get in the back door! Although there is a wood panel on the top of the doves, they've been annointed by just being in the right place at the right time, poor kids. I do put basins of water in there for them to take baths, which they use efficiently, but still. Yuk. Peacocks are BIG birds!
Posted by Audrey Heffner at 8:47 AM No comments: Links to this post